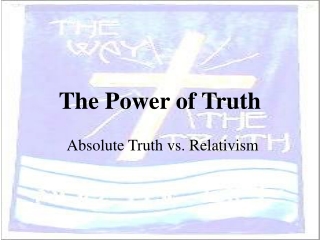 The Power of Truth

The Power of Truth. Absolute Truth vs. Relativism. What Would You Do if Someone Told You…. 2 + 2 = 5 There is no such thing as gravity The earth is flat Abe Lincoln was the 1st president of the US George Washington never existed Your mom is a prostitute.

The Power of Truth