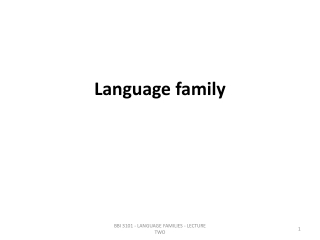 Language Family and Branches - . i n do-european languages. the most studied language family in the word. english.

The Khoisan Language Family - . presentation by nicole carpenter. what does khoisan sound like?. where khoisan is c

XML Language Family Detailed Examples - . most information contained in these slide comes from: http://www.w3.org/ these

Members of the Indo-European Language Family

USA'S History,Religion,Language, Family Sturcture and Education - Usa is a biggest country covering 50 states and a