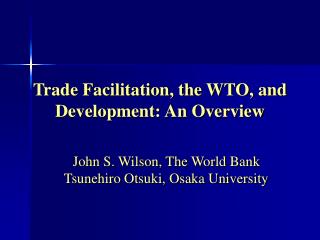 Trade Facilitation, the WTO, and Development: An Overview

Trade Facilitation, the WTO, and Development: An Overview

Trade Facilitation, the Doha Round, and LDCs - . nkululeko khumalo 26 june, 2005 livingstone, zambia. overview. what is

What does the WTO do for the Developing Countries? Leverhulme Lecture, Nottingham 22 April 2002 - . sam laird chief,

UNITED NATIONS CONFERENCE ON TRADE AND DEVELOPMENT - . march 2010. what is unctad:. “focal point for the un system on

WTO-WORLD TRADE ORGANIZATION - . wto is an international organization which was founded on 1995. the wto was born out of

Facilitation techniques - . the fishbone diagram for a general description of its use visit http://

WTO Agreement on Trade Facilitation The WCO’s Role - . 8 april 2014. what is the wco?. the wco represents 179 customs

TRADE FACILITATION IN THE WTO DOHA ROUND - . john clarke, deputy head of the ec delegation to the wto and the un, geneva.