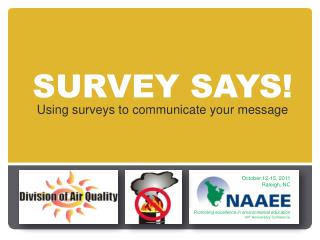 Cosmic Survey: What are Your Ideas about the Universe? - . test your knowledge about distance, age, and size for seven

The Wisest People Don’t Have All the Answers: Learn to Say, “I Don’t Know!” How Do You Feel Today? - . agenda.

The Odyssey: Calypso, the Sweet Nymph - . survey says…. fix it and turn it back in, please!. more to return. -notes

Family Feud - . b223 music entertainment marketing. famous families. scoring. 1 point for every correct answer on your

Workplace Messages - . madeline mercado voelker mmercado@mtu.edu peter a. larsen palarsen@mtu.edu. does the use of space