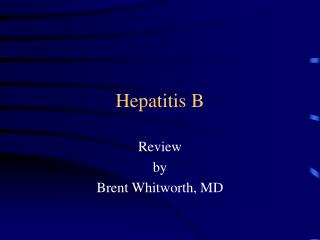 Hepatitis B . Review by Brent Whitworth, MD. Hepatitis B Virus. Hepatitis B virus (HBV) infection is a global public health problem. It is estimated that there are more than 350 million HBV carriers in the world, of whom 1 million will die annually from HBV-related liver disease.

Epidemiology and Prevention of Viral Hepatitis A to E: - . hepatitis branch centers for disease control and prevention.

HIV, Hepatitis, Herpes - . slackers facts by mike ori. disclaimer. the information represents my understanding only so

Hepatitis B and Hepatitis B Vaccine - . epidemiology and prevention of vaccine-preventable diseases national center for