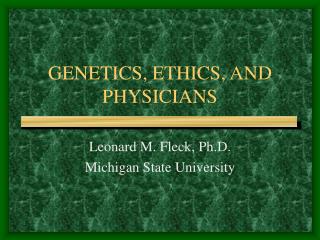 GENETICS, ETHICS, AND PHYSICIANS. Leonard M. Fleck, Ph.D. Michigan State University. TWO PREMISES. We are beyond the age of genetic innocence We have entered (and cannot exit) the age of genetic responsibility [Philip Kitcher, Lives to Come: The Genetic Revolution and Human Possibilities. Genetics - . chapter 09. do now. think about your favorite type of dog. if evolution is truly survival of the fittest,