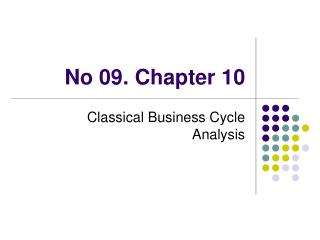 No 09. Chapter 10. Classical Business Cycle Analysis. Before We Begin …. Before proceeding with Chapter 10, look at this handout from the material in Chapter 9: Chapter 9 Appendix: The Model in Equations. Introduction. This Chapter: Chapter No.09 - . research q uestions. cutting questions to size. research question is based on the researchers' personal

Lecture No. 09-10 - . subject: alkali-aggregate reactivity. certain constituents in aggregates can react harmfully with