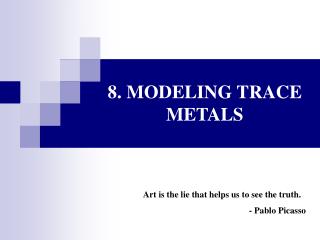 8. MODELING TRACE METALS. Art is the lie that helps us to see the truth. - Pablo Picasso. 8.1 INTRODUCTION. Redox-sensitive trace metals - . interest in them as “paleo-proxies” for bw [o 2 ] and/or c org rain rate to the

Lecture 3 Trace Metals in Seawater - . what are trace elements? why are they important? principal of oceanographic

Lecture 3 Trace Metals in Seawater - . what are trace elements? why are they important? principal of oceanographic

Concepts in Environmental Behavior of Trace Metals - . 1. chemical kinetics and sorption: a review. law of mass

Trace Evidence ll: Metals, Paint, and Soil - . chapter 11. introduction . many manufactured products and even most

Chapter 11 Trace Elements: Metals, Paints and Soil - . objectives: describe the usefulness of trace elements for the

Chapter 8: Failure of Metals - . issues to address. • how do flaws in a material initiate failure?. • how is fracture