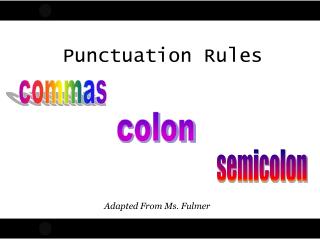 Production Systems - . symbolic based rule based system based on simple working principle system consists of: production

Punctuation - . “the traffic signals of writing”. the comma [,]. misuse of the comma accounts for half of all

Punctuation, Grammar, and Usage Exam Review - . fatima prefers to walk to market, while i would rather go by helicopter.