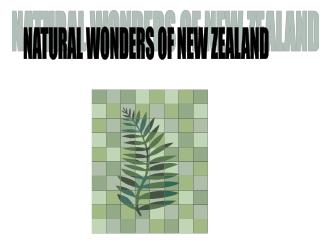 NATURAL WONDERS OF NEW ZEALAND. Waikoropupu Springs. With pristine waters, Waikoropupu Springs, near Nelson at the top of the South Island, are reputedly the clearest fresh water springs in the world, with an outflow of approximately 2160 million litres of water every 24 hours. FRYING PAN LAKE. IPTV Providers in AUS, New Zealand - Eezytv.com - Have you tried and failed in searching for the finest iptv providers in

The Natural Wonders of the Canary Islands All Inclusive - The canary islands make up one truly awe-inspiring archipelago.

The Natural World - . a crane fly sits on a window in sehnde near hanover, germany, sept. 11. (julian stratenschulte

New 7 Wonders of The World - . contents. the pyramid at chichen itza christ redeemer the roman colosseum the great wall

Wonders of engineering - . four of the most complex and ambitious construction. guangzhou tv