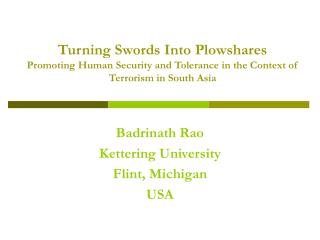 Turning Swords Into Plowshares Promoting Human Security and Tolerance in the Context of Terrorism in South Asia Badrinath Rao Kettering University Flint, Michigan USA The Scourge of Terrorism in India