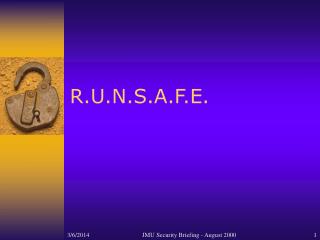 R.U.N.S.A.F.E. Today’s Situation – Universal Access… There are an estimated 600 million people with Internet access… All 600 million of them can communicate with your JMU connected computer. Any of the 600 million can rattle the door to your computer to see if its locked.