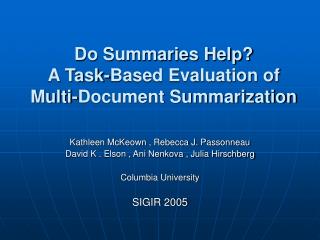 Do Summaries Help? A Task-Based Evaluation of Multi-Document Summarization

Do Summaries Help? A Task-Based Evaluation of Multi-Document Summarization

UNIT-II Data Preprocessing - . why preprocess the data?. why data preprocessing?. data in the real world is dirty

An Overview of Skills Diagnosis with an application to a Standardized Test - . an overview of skills

Currituck County’s Curriculum Mapping Project - . project overview. where are you in your knowledge?. 4 corners