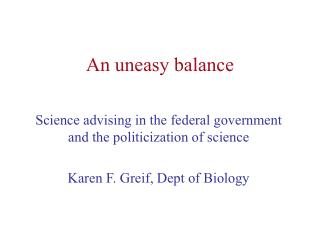 An uneasy balance Science advising in the federal government and the politicization of science Karen F. Greif, Dept of Biology Challenges in science policy-making Rapid technological changes that create novel issues Complex technologies that are difficult for non-scientists to understand