The Costs of the Iraqi Conflict: 2008 update - PowerPoint PPT Presentation 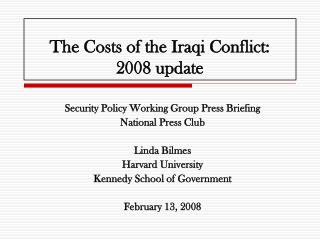 The Costs of the Iraqi Conflict: 2008 update

The Costs of the Iraqi Conflict: 2008 update

The Russian Federation - Chapter 8. the russian federation. section 1 the making of the modern russian state. the making

The First Amendment - . five freedoms that make us american. find the freedoms: warm up . observe the images on the

Current Events Week 1 8/24/2011 - . 1. both the libyan government and the rebels trying to overthrow it are claiming

Issues in Public Administration MPA 509 - . corruption in the perspective of pakistan . agenda . preview of last lecture

Officer Manning: Armies of the past - . insights into personnel systems (cultures) of other armies in history—

Military Law: Where do I find it? - . presented by andrea belanger jag librarian may 26, 2008. overview. specific

Support and Stability Operations and Changing Rules Governing the Use of Force - . lsn 26. agenda. names, definitions,