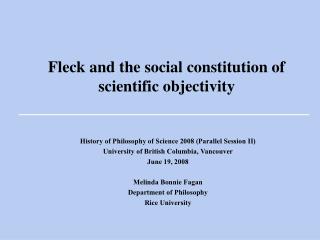 Fleck and the social constitution of scientific objectivity

Fleck and the social constitution of scientific objectivity

Unit 2 Creation of the Constitution - . essential question. how did the framers create the constitution?. unit overview.

8 th Social Studies CRT Review Questions from SDE - . the idea expressed by president lincoln in the quotation below is

The Florida Constitution - . what’s in it?. the florida state constitution. comes from the people rather than the

Scientific Method Review - . are you ready for your test?. q1. the step of the scientific method that is in a question