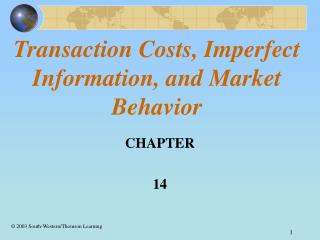 Transaction Costs, Imperfect Information, and Market Behavior. CHAPTER 14. © 2003 South-Western/Thomson Learning. Rationale for the Firm. In a world characterized by perfect competition the consumer could bypass the firm and deal directly with resource suppliers

Are they the same? Are they even all cells? - . virus. bacteria. plant. animal. keep going for more detail. virus

DRUG TOXICITY - . dr. peter maskell peter.maskell@bris.ac.uk. toxicology is the science that deals with the amount of an

ADSORPTION AT THE SOLID LIQUID INTERFACE - Technological importance of surfactant and polymer adsorption. .