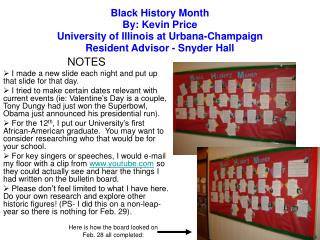 Black History Month By: Kevin Price University of Illinois at Urbana-Champaign Resident Advisor - Snyder Hall NOTES I made a new slide each night and put up that slide for that day. History of the Bassett, Edgecomb, and Snyder Families - . 100 th bassett-edgecomb-snyder reunion - 2007. why is it called

I will tell you of the wrestle which I had before God - . www.kevinhinckley.com. the wisdom of hollywood…. so,