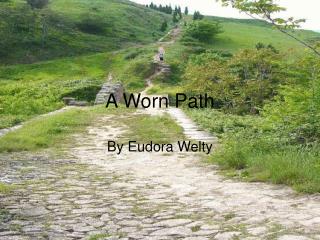 A Worn Path. By Eudora Welty. What emotions does this story evoke in you?. Answer 1:. At first it was confusing, you didn’t really now what was going on. If you read into all the symbols you feel anguish for this women that tries to overcome so much for her grandson that she loves.

Part IV Data Path and Control - . try to achieve cpi = 1 with clock that is as high as that for cpi &gt; 1 designs;

Routing in packet switching networks - . routing is a key function: determine a (best) path from any source to any

ALDINE ISD Dress Code - . this information is on pages 6&amp;7 of the discipline management plan in the

C.F.I.S.D. Dress Code - This information is on pages 34-35 of the student handbook pajamas and slippers are not

German Path to War - . objective: describe the ways hitler violated the treaty of versailles and the path that germany