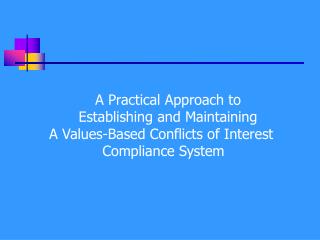 Disclosure - The pharmacy practice model: where are we going and how will we get there? john b. hertig, pharmd, ms

Quality and safety educational training programmes - . and how we evaluate them. conflicts of interest. ekaterine

Establishing Internal Controls - . session objectives. provide an understanding of why an organization should have

Fundamentals of Conflict of Interest in Research - . by camille a. mcwhirter, j.d. director, research compliance usf

GBMC Ethics and Compliance Program - . to every patient, every time, we will provide the care that we would want for our