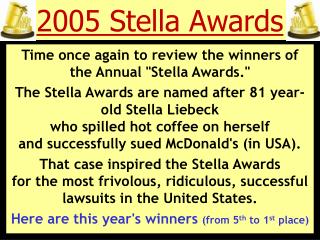 2005 Stella Awards. Time once again to review the winners of the Annual "Stella Awards." The Stella Awards are named after 81 year-old Stella Liebeck who spilled hot coffee on herself and successfully sued McDonald's (in USA).

Stella - . agenda. project goal/where is the pain? what is stella? market size who are the target customers? value

To: Stella - . stella's crazy hair day. from: peter. once upon a time there was a girl named stella. she goes to a great