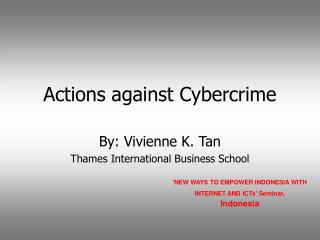 Cyber Crime Infecting Everyone - Computer literacy in bangladesh is steadily on the rise. there is also a growing number

Violence Awareness Presentation - . on your actions. presentation goal. to clarify what bullying is. to stress that your

Solving problems by searching - . chapter 3. why search?. to achieve goals or to maximize our utility we need to predict

CCTV 101 - Infinova. cctv 101. what is cctv? . what is the purpose of cctv? cctv (closed circuit television) is a system

Surfing While Muslim - . privacy, freedom of expression and the unintended consequences of cybercrime legislation. coe