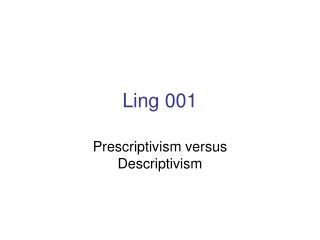 Ling 001 - . word structure, part ii. outline. in looking at morphology we are examining the relationships that words

001 - Please activate the permalinks plugin! (at permalinks_dispatcher.php line 20 in function

LING 322 - . teaching literacy skills – reading &amp; writing. what is literacy?. the ability to read and write