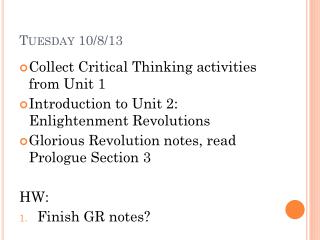 Tuesday, Aug. 27 - . sit where you sat yesterday if you were given a scavenger hunt worksheet than please get that out.

Tuesday, May 6, 2014 - . world asthma day is an annual awareness-raising event organized and sponsored by the global

Tuesday, October 1 st - . warm up. b. what are the five congruence proofs for triangles? given abc is similar to akl,

Tuesday, November 1 st !  - . hsap is next semester ! let’s practice with some biology—write your answers in your

Tastey Tuesday! - . your new pi day question is coming on the next slide… read until we begin! . submit your pi day

Tuesday, December 6 th - . 3 types of rocks the rock cycle. homework packet. this is due on: wednesday, dec. 14 th we

Tuesday, January 14 - . open agenda to today’s date. write quote in composition book. “there is nothing insignificant