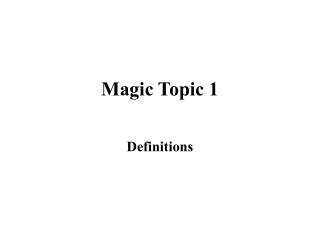 Magic Topic 1. Definitions. What is magic?. Frazer , The Golden Bough , 1900 Magic is a technique that aims to manipulate impersonal forces. According to Frazer, Magical thought. … depends on a belief that objects and individuals act on each other at a distance,

How to Narrow a Research Topic - . define the word broad? what do you think happens if you are researching and your topic

SEO: THE MYSTERY, THE MAGIC GATEHOUSE NEWS &amp; INTERACTIVE DIVISION - . agenda. what is seo? why is it important?

Topic 1- Tectonic Impacts - . this is the first topic of the earth and environmental science hsc course. it’s very

steganography - My seminar topic for 6th semester of engineering. this topic is related to data

Magic of Electricity A to Z’s and One, Two, Threes - . jackie l. helton extension assistant: curriculum department of

There Is No “Magic Dust”: Building a PLC From the Ground Up - . anthony muhammad. magic dust?. instant results