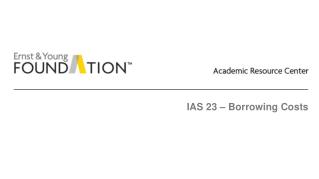 IAS 23 – Borrowing Costs. Borrowing costs. US GAAP. IFRS. Borrowing costs primarily include interest on borrowings and other costs to acquire debt. Similar. Borrowing costs that are directly attributable to the acquisition, construction or production of a qualifying asset can be capitalized. Start up costs and running costs - . starter. what is a cost to a business?. learning outcome. p1 identify the difference

The Costs of Production - 20. the costs of production. chapter objectives. why do economic costs include both explicit

Lexical Borrowing Lectures 3 - . iwanfauzi09@yahoo.com. (the introduction). what borrowing &amp; why it so. lexical

SESSION 20 : BORROWING AND INSURING - . talking points. borrowing 1. people receive credit when they obtain the use of

Costs - . lesson 2:year 9 btec. learning outcomes. by the end of todays lesson……. i will be able to explain what

Chapter 7 Costs - . people want economy and they will pay any price to get it. lee iacocca (former ceo of chrysler).

7-1: Buying a Home - . costs of financing a home:. purchase price = tag price downpayment = a percentage of the purchase

Trade costs - . the “take-away” for this lecture to realize the gains from trade, buyers and sellers must incur a