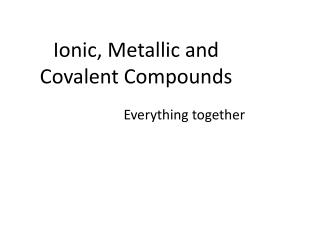 Ionic, Metallic and Covalent Compounds. Everything together. Please complete the warm-up in your composition book. Today’s Goal. How the objective will be completed? Identify an elements’ oxidation number. Describe/explain how the oxidation number (charge) of an element is determined. 10. Organohalides - . why this chapter?. reactions involving organohalides are less frequently encountered than other

(4.4) Ionic and covalent bonds - . solubility lab. objectives. students will know and be able to: determine

10.29.12 Nu Salt Lab - . obj: we will differentiate between elements and compounds by completing lab. s. calculate the