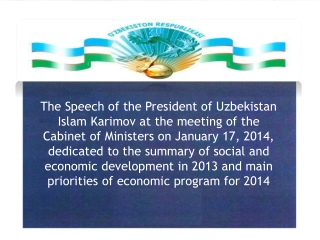 The Speech of the President of Uzbekistan Islam Karimov at the meeting of the Cabinet of Ministers on January 17, 2014, dedicated to the summary of social and economic development in 2013 and main priorities of economic program for 2014. ‘National Economy’ - What do you think this term means? what have you read or heard about the national economy

Changes In National Politics - . the national government. republican/democrats- were similar in ideas. both managed to

TECHNOLOGICAL CHANGES IN THE GLOBAL ECONOMY - . presented by: alok gupta.

National Differences in Political Economy - . chapter two. political economy. a term that stresses that the political,

THE NATIONAL ECONOMY - . 1790 to 1860. the industrial revolution begins. starts in britain the textile industry slow to

The National Economy - . economy structure of economic activity in a community, a region, a country, a group of

The national economy - . introduction to macroeconomics mr e mc kee 2002. macro economics. is a study of the working of

Changes in National Politics since 1968 - . standard 25. the shifting of power. many americans supported the gov’t and