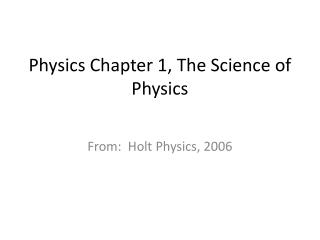 Physics Chapter 1, The Science of Physics Physics Chapter 1, The Science of Physics. From: Holt Physics, 2006. Everything around us can be described by using physics. Areas within Physics. * Mechanics : Studies motion and interactions between objects. Examples: Falling objects, friction, weight, spinning objects. Mechanics.

Physics Chapter 1, The Science of Physics

PHYSICS - . physics. is a  natural science  that involves the study of  matter  and its  motion  through spacetime

What Is Physics? - . mrs. akibola pearland isd. mathematical concepts. physics experiments involve the measurement of a

Physics - . physics is the study of the laws of nature that govern the behaviour of the universe, from the very smallest

Physical Science: Physics - . work, power, waves, em spectrum. work and power. work in physics is not the same as the

Introduction to Physical Science - . essential question: what is the nature of physical s cience and how does it relate