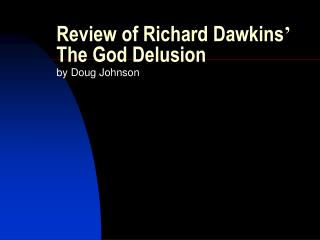 Review of Richard Dawkins ’ The God Delusion. by Doug Johnson. Defining Terms. Like Skinner and Wittgenstein, Dawkins wants to define terms as they are used God defined: A supernatural creator that is appropriate for us to worship

Chapter 6 - . learning and behavior. learning. a more or less permanent change in behavior that results from experience.

Dawkins and the rejection of the soul - . lo: i will know why richard dawkins rejects the traditional idea of the soul.

“The Biofuel Delusion” + reflections on teaching ecological economics - . with application to zerocarbonbritain 2030

Evidently so….. - Evidently so…. writing and the ged science short answer. jeff goodman department of curriculum and

Review of the development of portraiture - . complement to the text. the medieval period. illuminated portrait of richard

Introduction to LTER Information Management - . john porter. “if you want to understand life, don’t think about

Sociology and Science - . www.educationforum.co.uk. what is science?. many scientists claim there is a clear distinction

Is belief in God a delusion? A response to Richard Dawkins - . “ it has been a good year for atheists…” the times,