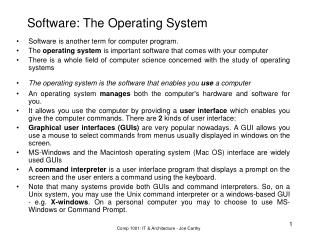 Software: The Operating System. Software is another term for computer program. The operating system is important software that comes with your computer There is a whole field of computer science concerned with the study of operating systems System Software - . what is system software ? consists of the programs that control or maintain the operations of the

Topic 6 Operating Systems - . applications software allow the user to communicate with the system software. the system

Software - . kyle watson. allows a single user to control one computer. allows multiple computers to be connected across

Computer Systems - . operating systems and software. next. lesson objective. this lesson will teach you about computer

Software Applications For Education - . ed205 computers in education. the role of the operating system. software can be