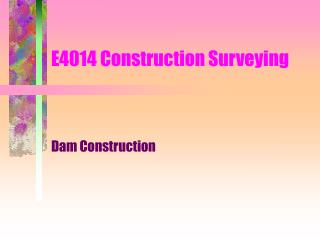 Top Four Hazards in the Construction Industry - Objectives in this course, we will discuss the top 4 hazards in the

Surveying - . www.powerpointpresentationon.blogspot.com. what is surveying. surveying has traditionally been defined as

The Manual of Surveying Instructions , the PLSS Datum, and the Local Surveyor - Presented by: stephen k. haddock, pls,

TACHEOMETRIC SURVEYING - . tacheometry or tachemetry or telemetry is a branch of angular surveying in which the

Dumpy Level Surveying - . energy &amp; environment. revision from previous lesson. what are these lines called and

Becoming a Surveyor - . the surveying career. offers opportunities for advancement to being a partner or owner of a firm