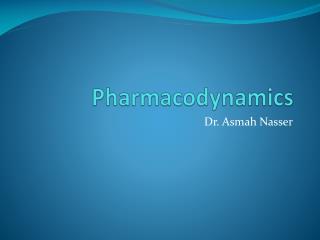 PHARMACODYNAMICS - . what are drugs ?. a drug is a chemical substance or a product that is used or intended to be

Pharmacodynamics - . the study of the biochemical and physiologic effect of drugs and the molecular mechanisms by which

Pharmacodynamics - . pharmacodynamic concepts . receptors: specific molecules in a biologic system with which drugs