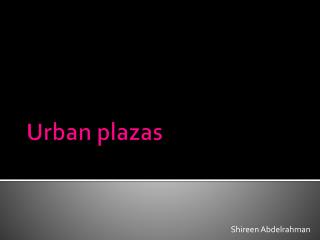 Shireen Abdelrahman. Urban plazas. To create an urban plaza , urban designers must know what kind to make , where to place it, how to design it to provide a humanizing contribution to urban life.

URBAN - . landen rowland. composition. this is a rule of thirds photo. it is aligned to show two out of the four focal

URBAN - Source sqa specimen paper 2013. urban. study os map item b of the coventry area . use item b to give map evidence

Urban art - . karim ismat &amp; shakeer ahmed. graffiti. what is it? where is it used? how is it created? why is it

Urban Forestry - . urban forestry is the active recognition that individuals and communities living in urban landscapes

Urban - Rural. urban. new zealand: an urban/rural profile. introduction developing the classification what we found out

URBAN ARTISANS - . prior to the industrial revolution, most manufacturing was done by urban artisans skilled craftsmen