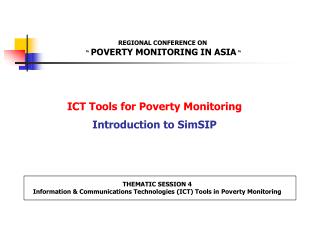 ICT - Poverty - . onno w. purbo onno@indo.net.id a common indonesian. disclaimer. i am a trained engineer, not an

Poverty Monitoring - . taking a stock of what is out there ruslan yemtsov and asad alam. plan. international publications

ICT Tools for adult literacy - . some facts about iceland. iceland is an island of 103.000 sq.km population around

Monitoring and Evaluation for Poverty Reduction - . forum on national plans as poverty reduction strategies in east

Tools for Monitoring &amp; Evaluation - . gender audit. what is gender audit?. traditional use of audit relates to

Libraries as Tools for ICT Development

ICT  INTRODUCTION - . ict is an acronym that stands for information communications technology . why there is no accepted

ICT and Environmental Monitoring - . mr conti ict in society. why monitor environments?. all kinds of environments can be