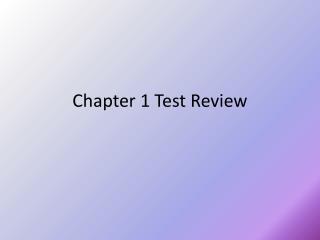 Chapter 1 Test Review. 1. According to the heliocentric model, the reason the planets always appear to be near the ecliptic is that a ) the ecliptic is only 23.5 degrees from the celestial equator. b ) the planets revolve around the Sun in nearly the same plane. Chapter 4 - . test generation. what is this chapter about?. introduce the basic concepts of atpg focus on a number of

A Brief Review of Chapter 1 - . which of the following theoretical approaches in psychology emphasized studying only