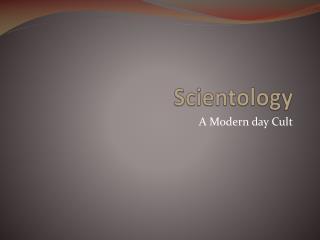 Scientology. A Modern day Cult. What is Scientology?. “ KNOWING ABOUT KNOWING, or science of knowledge ” (L. Ron Hubbard – Founder). What’s wrong with Scientology?. It is a CULT It is a FALSE RELIGION Scientology 4 - . a modern day cult. “you will find… the christ legend as an implant in pre-clears a million years

The Church of Scientology - . rels 225 cults and new religious movements. scientology. probably the most controversial

Scientology - . quick introduction . scientology describes itself as the study and handling of the spirit in relationship

Christian Science and Scientology. What do they have in common? - . definitely not science!!. christian science. founder

All About Scientology - . by zackary collevechio. beginnings. scientology was created in 1952 by l. ron hubbard he worked

Welcome to the Scientology Jeopardy Game - . created by: valerie stone. instructions. click on the selected amount under

Scientology - . the theological dimension scientology's basic constant belief is that people are immortal beings who have

*Christianity vs Scientology* - . by: falynn nelson (jared doolittle). christianity the bible is the last

Assignment on 2-26 - . faith and religion. as ways of knowing. what is religion?. religions are systems of values,