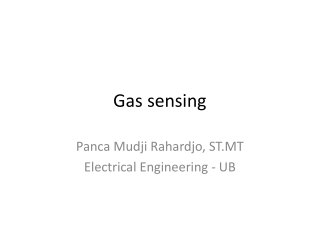 Gas sensing. Panca Mudji Rahardjo , ST.MT Electrical Engineering - UB. Gas sensing and analysis is required in many applications. A primary role of gas sensing is in hazard monitoring to predict the onset of conditions where flammable gases are reaching dangerous concentrations. Quorum Sensing - . by sachi lagwankar. what is qs?. process of bacterial cells “talking” to each other in order to be

Remote Sensing - . vulnerability is the degree to which a system is susceptible to, or unable to cope with, adverse

Compressive Sensing: - . an introduction and survey of applications. objectives. description of theory discussion of