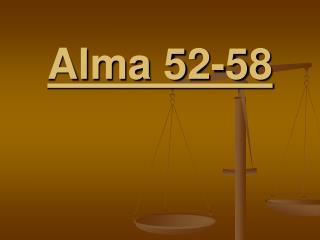 Alma 52-58. War is always the result of sin on someone’s part! Alma 52:6 “ Preparing for war ” A nation must prepare to defend itself, but it can go too far in its preparations. The First Presidency issued this warning:

The ALMA Observing Tool - . kartik sheth. naasc csv liaison alma/nrao. getting the ot. go to this website to download the

Alma 29 - . o that i were an angel!. you find a lamp and the genie offers you one wish. he will convert any person you

Alumni and their Alma Mater: It is about reciprocity and complementarity - . by prof rc bodibe vice principal: student

ALMA: MM Observing Considerations - Overview of talk. . 2. perspective: getting time on alma will be competitive!the