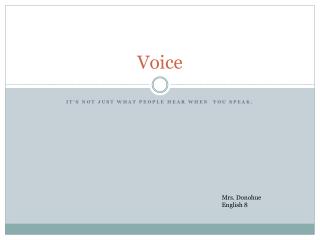 Voice. It’s not just what people hear when you speak. Mrs. Donohue English 8. What is Voice?. Voice is: Your writing style Your personality What makes the writing come alive for a reader A form of creative expression. Let’s Practice. By using our physical voice Voice - . p.134,148,. points of view. -omniscient pov—narrator is not a character in the story; omniscient means “all

Voice… - . the writer’s personality. objective for the day. today we will listen for “voice” in writing.

VOICE - . voice. the voice is the writer coming through the words, the sense that a real person is speaking to us and

VOICE - . the third element of the 6 + 1 writing traits. how can you read voice?. voice is the author’s fingerprint on

Voice - . breathe!!!. air must move for sound to be created. use of diaphragm muscle. exhale and count to twenty while

Voice - October 3 rd , 2011. voice. today, i will read and respond to “ on a rainy river” by analyzing the components

Voice - . breathe!!!. air must move for sound to be created. use of diaphragm muscle. exhale and count to twenty

Voice - . what is it? how the author feels towards a topic angry? excited? silly ? confused? sarcastic? knowledgeable ?

Voice - . voice. t he characteristic mode of expression of a first-person narrator. it can be created by a character’s

Voice - . “voice…..the sense that a real person is speaking to you and cares about the message. it is the heart and

Voice - . persuasive essay. what is voice and how do i get it in my writing?. the writing shows an awareness of an