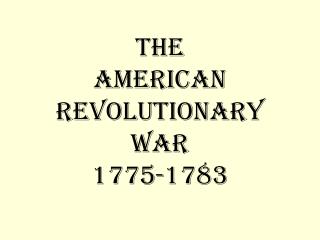 Westward Expansion - . money and muscle. manifest destiny. the belief that it was america’s god-given destiny to expand

Revolutionary War Battles - . lexington/concord. “shot heard around the world” when: april 18-19 1775 where:

Why did Britain lose the American War of Independence of 1775-1783? - . objectives. in this activity you will: learn how

FOUNDING FATHERS - . the men who made america. george washington the father of our country. served as an officer in the

American Revolution (1775-1783) - . first shots were fired at lexington and concord. george washington was the colonial