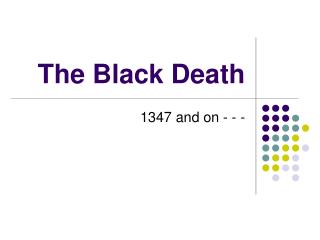 The Black Death. 1347 and on - - -. The Black Death - Structure. Introduction Forms of Disease and Transmission Path of the Plague Recurrences Efforts to stop the Plague Quotes on the Black Death Consequences: Economic Social and Psychological Religious Music and Art.

Changes After Death - . dr. raid jastania. changes after death. decomposition why do we need to know: not to misinterpret