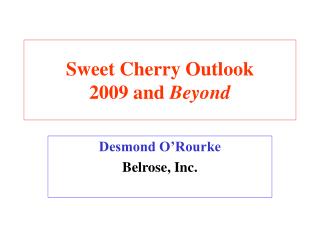 Sweet Cherry Outlook 2009 and Beyond

Sweet Cherry Outlook 2009 and Beyond

OUTLOOK OVERHAUL - . make room for mits (most important things). what themes do you see in outlook?. deadline? to forward

Outlook for the future - . meeting of the heads of european nfris. european forest research. 6 eap: 2002 -

I am sweet mango Smooth on the inside but hard from the outside. I can be sour as a lemon zest - Strong as a rock, soft

Effects of a World War in Canada - . war measures act. created in 1914 – may be invoked during war, invasion, or