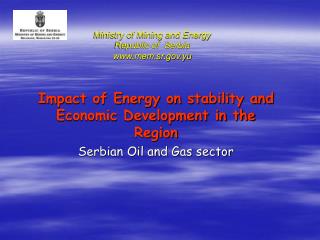 Ministry of Mining and Energy Republic of Serbia mem.sr.yu

Ministry of Mining and Energy Republic of Serbia www.mem.sr.gov.yu. Impact of Energy on stability and Economic Development in the Region Serbian Oil and Gas sector. SERBIAN ENERGY MILESTONES. Energy Law is enforced on August 1st 2004

Ministry of Mining and Energy Republic of Serbia mem.sr.yu

Presentation of the Republic of Serbia - Inland waterways in serbia. - how the danube within serbia is being integrated

SLOVAK REPUBLIC - Date of establishment: january 1,1993 (after splitting of the czech and slovak federative republic)

Republic Hydrometeorological Service of Serbia - . weather radar network and use of radars within the multi-hazard early

Corruption in the Customs: Two stages and the turning point in Serbia - . by boris begovic center for liberal-democratic