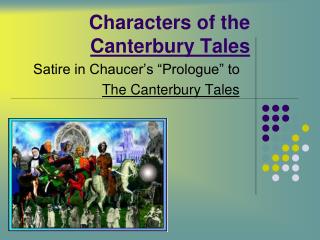 Characters of the Canterbury Tales

Characters of the Canterbury Tales. Satire in Chaucer’s “Prologue” to The Canterbury Tales. distinguished followed chivalry truthful, honorable ridden into battle honored for his graces fought in many battles modest, not boorish a true, perfect knight. NOT satirized

Characters of the Canterbury Tales

Learning About Characters - . let’s begin!. hello there, i’m arthur! my friends and i want to help you learn about

Describing Characters - . words to know and use. humble. modest or meek in spirit or manner : not proud or bold synonyms