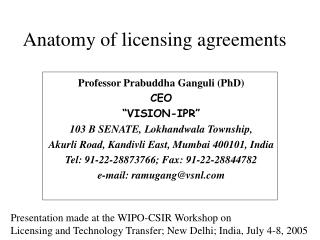 KEY ASPECTS OF FIDIC DBO CONTRACTS - . 23/09/2011. content. introduction : the ngrba and the french support how to choose

Geographical Indications &amp; Traditional Knowledge: The Experience of Ethiopia - . outline of presentation at the

Bell Ringer - . what is legality? what makes something legal/illegal? what could make a contract illegal?. ch 9: legality

Bell Ringer - . what are the 6 parts of a contract? what does it mean to consider something? why do parties exchange

The Statute of Frauds - . the statute of frauds required that, to be enforceable, the following six types of contracts