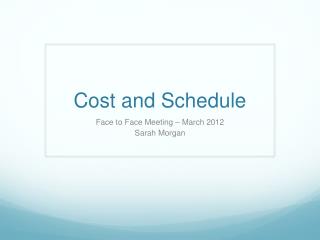 Cost and Schedule. Face to Face Meeting – March 2012 Sarah Morgan. Where we are…. Schedule reworked and approved as of January Three baseline changes to date, the last one impacted the entire schedule and a chunk of the costs LBNL was funded through February 2012 Schedule and Cost Growth - Background. at the mda* risk working group of 29/30 may 01, schedule risk was a major