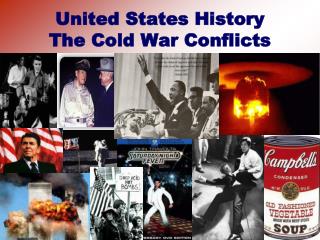 United States History The Cold War Conflicts. The Cold War 1945-1991. Cold War Begins. a non-military battle of diplomacy and propaganda between the United States and Soviet Union Lasted from 1945-1990 led to “hot” wars around globe in Korea, Vietnam

Korematsu v. United States (1944) - . as a result of the pearl harbor bombing in 1941 an executive order was issued by

Standard 1 - . conflicts between regional and national interest in the development of democracy in the united states. day

The Cold War - . 1945-1990 reshaped the world order of the twentieth century and created a rivalry between the u.s. and

U.S . History Unit 1 Notes - . early colonization and development of the united states. who inhabited it first?. outside

AP U.S. History Unit 8 - . american imperialism and involvement in world war i. focus while reading. clash between the

UNITED STATES POWER SQUADRONS ® - . insert your own slide as attention getter. check the instructor manual for a few

Standard II The student will understand the formation and development of the United States. - Standard ii the student