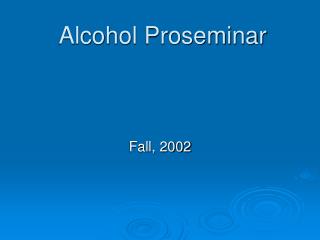 Alcohol Proseminar. Fall, 2002. Address to the legislature by a Mississippi state senator in 1958. You have asked me how I feel about whisky. All right, here is just how I stand on this question: PROSEMINAR - . environmental management envr e-200. do you have?. system for keeping notes on your readings and draft