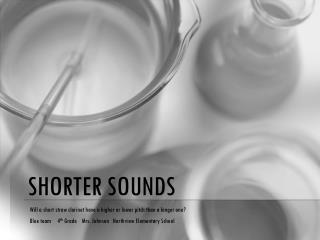 Shorter sounds. Will a short straw clarinet have a higher or lower pitch than a longer one? Blue team 4 th Grade Mrs. Johnson Northview Elementary School. Statement of the Question. The sound patterns of language - . phonology chapter 5. this lecture. there are systematic differences between: what

The sounds of language - . phonetics and phonology. preview : phonetics. how are speech sounds made ? how does sound

Formal Properties of Language: Form of the Message - . the components of language:. the sounds of language the structure

Anatomy of Phonation - . ch. 4. spoken communication. voiceless phonemes or speech sounds- produced without the use of

DISCLOSURE - “although humans make sounds with their mouths and occasionally look at each other, there is no solid